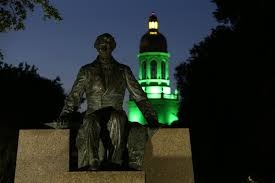 This morning Baylor University took the first of many necessary steps in response to the recent media attention surrounding the sexual assault scandal on their campus. They have “fired” Ken Starr.  Okay, so “fired” is a really strong word.  They have removed him from the position of school president.  Rumor has it that they are offering him a position in the law school while maintaining his current salary.  That punishment is nothing more than a slap on the wrist.  It equates to lifting up the rug and sweeping the dirt under the carpet.  The dirt is still there, but the guests won’t be able to see it unless they look for it.  Apparently, until the clouds opened up and Divine light shined a beacon onto the university, there was no need to “handle” the situation at all.  I say this simply because NOTHING has been done about this until now.  For those of you who have been living in peace without this knowledge, I am providing the timeline below.  Prepare yourselves…It is a lot.  It will take a while to read, which will only amplify why I have been so extremely pissed off for so long that no one has been listening.  I am not a victim.  I do not know any of these victims personally.  However, when I close my eyes, I can see the faces of the women in my life that I have loved dearly that could easily be inserted into any of these scenarios. (i.e.: my sister, my mother, my daughter, my best friend, my patients)

Crazy, Isn’t it? How in the world has this been kept so hush-hush?  Well, apparently if you know what you are doing and have “buddies” on the local PD, it’s pretty easy.  According to ESPN’s Outside the Lines, the Waco PD agreed to take “extra precaution” to ensure that these cases would be kept out of the public eye because they were “high profile”.  Together, they also found a loop-hole in Texas law that states that if cases remain open, they can be shielded to the public eye.  I wonder how many “open” cases there are against Baylor athletes down at the police station?  It’s sickening.  Below, I have taken an excerpt from the “Know your IX” website:

Students and other concerned third parties have the right to report sex discrimination, sexual harassment, and sexual violence to a school. Schools who fail to appropriately respond can suffer consequences under Title IX, such as the loss of federal funding, a non-compliance finding, a voluntary resolution agreement, or a lawsuit. The U.S. Department of Education accepts Title IX complaints, which can be reported to OCR@ed.gov. Additionally, Title IX allows harmed individuals to bring a private civil suit to seek money damages and an injunction to stop discriminatory practices.  http://knowyourix.org/title-ix/title-ix-in-detail/

Although Baylor is a private institution, I assure you the university still receives government funding.  Cut it.  Allocate those funds to other universities in the state and help increase their student population.  I can’t say that I would have ever embraced sending either of my kiddos to BU but I guarantee that at this point, neither of them will EVER attend Baylor University when the time comes.  I cannot allow the safety of my children to be compromised.  Yes, sexual assaults happen everywhere, but not every campus hides behind the police departments and essentially ignores them in an effort to protect a winning football team. All parents should stand up against this.  Yes, this is Texas.  Yes, football is king.  However, we need to remember that winning isn’t truly winning when integrity is pushed to the wayside.

What else needs to happen?

1. Fire anyone who knew ANYTHING about this and failed to come forward.  Police.  Coaches.  Professors.  Title IX Officers.  FIRE THEM ALL.

2. The Big XII needs to give Baylor the boot and I encourage all other conferences to boycott their program until justice is truly served.

3. PRESS CHARGES.  There are LAWS that were broken.   Are all educators not held to obligatory reporting?

I read a quote today in Chip Brown’s article titled, Sources: BU Regents Fire Kenneth Starr, “The feeling is if the board got rid of Art (Briles), they’d be sitting in a $300 million mausoleum instead of that new football stadium.”

Oh, the irony.  It seems that Baylor is still missing the point.  They are STILL choosing football over the safety of their daughters.  I am so sorry that they spent all of that money on a stadium for a program they believe is only strong because of a single coach.

'At Baylor, we celebrate our distinctive place in higher education - where research, scholarship and faith guide the mind in understanding the complex diversity of God's creation and prepare the whole person for service and leadership.’

I don’t believe you Baylor.  You have lost your focus.  “The meek He will guide in judgment.  And the meek He will teach His way.” Psalms 25:9. It is all there in your bible.  MY BIBLE.  Find some humility Baylor.  Stand up and take ownership of your mistakes.  Go to YOUR victims and apologize.  Show them what it really means to be a Christian in these trying times.  Hold yourself and all of those involved accountable.  You can donate money to every poor person in America.  You can sponsor countless mission trips to Uganda.  You can present yourself “In Service” but if you aren’t “walking the walk” it doesn’t really count.  It doesn’t matter what it looks like.

Here’s my message to Baylor: If you are serving prime rib with shit sauce, you are really just serving shit.

The woman went to the hospital after the alleged assault and was examined by a sexual assault nurse examiner, according to the court records.

(taken from Reddit.com submitted by ken_man)